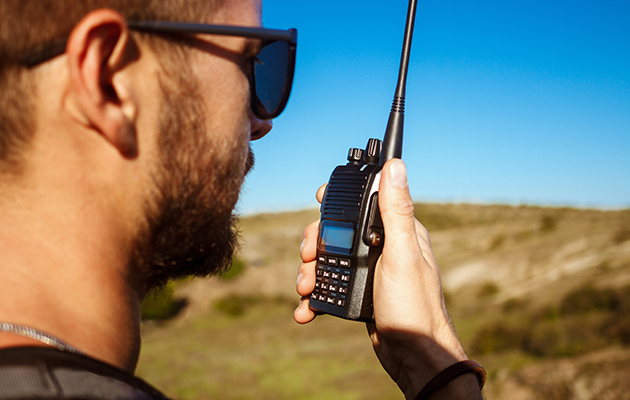 The General Mobile Radio Service (GMRS) is a land-mobile FM UHF radio service designed for short-distance two-way communication. It requires a license in the United States, but some GMRS compatible equipment can be used license-free in Canada. The United States permits use by adult individuals who possess a valid GMRS license, as well as their immediate family members.[a] Immediate relatives of the GMRS system licensee are entitled to communicate among themselves for personal or business[1] purposes, but employees of the licensee who are not family members are not covered by the license. Non-family members must be licensed separately.

GMRS radios are typically handheld portable devices much like Family Radio Service (FRS) radios, and they share a frequency band with FRS near 462 and 467 MHz. Mobile and base station-style radios are available as well, but these are normally commercial UHF radios as often used in the public service and commercial land mobile bands. These are legal for use in this service as long as they are certified for GMRS.

GMRS licensees are allowed to establish and use "Repeaters" to extend the range of their communications.

Any individual in the United States who is at least 18 years of age and not a representative of a foreign government may apply for a GMRS license by completing the application form, either on paper or online through the FCC's Universal Licensing System. No exam is required. A GMRS license is issued for a 10–year term. The fee is $70 now $35 for most applicants.

A single GMRS license covers you and your immediate family (spouse, children, grandchildren, stepchildren, parents, grandparents, stepparents, brothers, sisters, aunts, uncles, nieces, nephews, and in-laws). The family members do not need to live in the same household to be covered by your GMRS License. GMRS license holders are allowed to communicate with FRS users on those frequencies that are shared between the two services. GMRS individual licenses do not extend to employees.

New GMRS licenses are being issued only to individuals. Prior to July 31, 1987, the FCC issued GMRS licenses to non-individuals (corporations, partnerships, government entities, etc.). These licensees are "Grandfathered" and may renew but not make major modifications to their existing licenses. For more information on how to get your GMRS license, see our section on Getting Your GMRS License.

In any case, each GMRS station must be identified by transmission of its FCC-assigned call sign at the end of a transmission or a series of transmissions, and at least once every 15 minutes for a series lasting more than 15 minutes. The call sign may be spoken or sent with audible tones using Morse code. A repeater station handling properly identified transmissions of others is not required to send its own station identification.

As with other UHF radio services, the reliable range is considered to be Line-of-sight and the distance to the Radio Horizon can be estimated based on antenna height. Theoretically, the range between two hand-held units would be about one or two miles (about 1.5–3 km); mobile units have higher antennas and a range of around 5 miles (8 km). A GMRS Repeater with an antenna that is high above the surrounding terrain can extend the usable range over a wide area – for example, up to a 20–mile (32.2 km) radius around the repeater station. Obstructions such as hills and buildings can reduce the range. Higher power does not necessarily give a proportional increase in range, although it may improve the reliability of communication at the limits of line-of-sight distance.

GMRS is allotted 30 frequency channels in the vicinity of 462 MHz and 467 MHz. They are divided into 16 main channels and 14 interstitial channels.

Licensees may use the eight main 462 MHz channels for simplex communication or repeater outputs.

GMRS operators are permitted to transmit at up to 50 watts, on the 16 main channels, but transmitting 1 to 5 watts is more common in practice.

All 22 Family Radio Service (FRS) frequencies are shared with GMRS, and users of the two services may communicate with each other. With the exception of FRS channels 8 through 14, GMRS licensees may use higher power radios with detachable or external antennas.

NOTE: Neighborhood Radio Watch Programs ARE NOT a replacement for Emergency Services such as Police, Fire, the Sheriff's Office or 911. These programs are intended solely as a backup communications solution When All Else Fails.

The El Dorado County Amateur Radio Club is a "not-for-profit," all-volunteer Community Service organization. Members are not reimbursed for their Membership or for services provided to the Community. All of the Community Radio equipment we furnish is provided at or below our out-of-pocket costs, and our general support services are offered free of charge. Radio acquisition, programming, and training workshops provided by our Club Members are free of charge. If people need help installing their equipment at home, unpaid Volunteer assistance may be available. Donations to the Club to sustain our efforts are gratefully accepted but are not required nor expected.